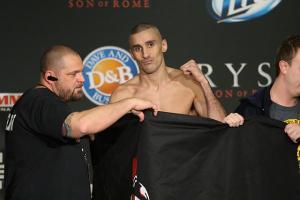 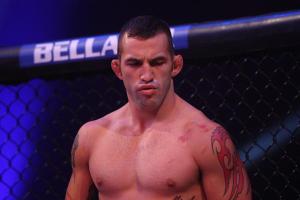 UFC veteran, Terry Etim made a successful Bellator debut, earning a unanimous decision win over Patrick Cenoble last November. He was released from the UFC following a 1-3 record in his last four fights with the promotion, including a highlight reel knockout loss to Edson Barboza at UFC 142.

Derek Anderson impressed his Bellator debut, dominating Patricky Freire from start to finish to get the unanimous decision victory. He remains unbeaten in his young mixed martial arts career with a record of 10-0, with nine fights ending in stoppages (3 KO/TKO, 6 Submissions).

Derek Campos earned his fourth straight victory in the cage at Bellator 107 with a unanimous decision win over Martin Stapleton last November. He’s won his last two fights under the Bellator banner after losing his debut in May of 2012 to Rich Clementi.

Brandon Girtz earned his first appearance in a Bellator tournament on the strength of a 3-1 record in his last four fights. He’s won back-to-back first round armbar victories over Poppies Martinez and Mike Estus. 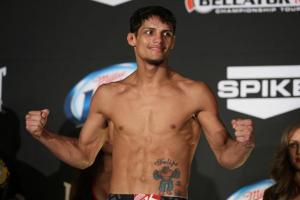 Patricio Freire proved once again he’s one of the top featherweight fighters in the world, stopping former UFC standout, Diego Nunes in the first round. He’s now won five out his last six fights, only losing a closely-contested split decision to champ Pat Curran at Bellator 85.

Fabricio Guerreiro earned his first Bellator victory and advanced to the semifinals with a unanimous decision win over Desmond Green in the opening round of this year’s featherweight tournament. Guerreiro made his promotional debut in Bellator’s season eight’s tournament, but exited in the quarterfinals after being submitted by Magomedrasul Khasbulaev.

Joe Taimanglo extended his current win streak to ten straight victories with a unanimous decision win over Andrew Fisher in the quarterfinals. Notable victories during the streak include a submission victory over UFC-veteran Per Eklund, and a submission win over Ronnie Rogers in his Bellator debut in March.

Former Strikeforce roster member, Just Wilcox returned to action for the first time in 14-months, to submit Akop Stepanyan in the second round to advance to this season’s 145-pound tournament quarterfinals. Wilcox wasn’t transferred to the UFC after the merger with Strikeforce, likely due to back-to-back losses against Caros Fodor and Jorge Masvidal.