Dustin Poirier proved once again that he remains one of the elite fighters in the UFC’s featherweight division with a decisive unanimous decision victory over Erik Koch at UFC 164. He’s traded wins and losses since February of last year, also earning victories over Max Holloway and Jonathan Brookins, both by submission. Losses were a fourth round submission defeat to Chang Sung Jung and a decision loss to Cub Swanson at UFC on Fuel TV 7.

Season 14 winner of the Ultimate Fighter, Diego Brandao extended his win streak to three inside the octagon after a one-sided unanimous decision victory over Daniel Pineda at UFC Fight Night 26. He’s now 4-1 in the UFC, including wins over Dennis Bermudez, Joey Gambino, and Pablo Garza.

Another loss might very well end the career of fan-favorite, Chris Leben, who has lost four out his last five fights, including a current three-fight losing streak. Last time in the cage, Leben didn’t have much to offer Andrew Craig, who dominated the fight despite the ludicrous split decision announcement. The last time Leben got his hand raised in the cage was after a 27-second knockout of Wanderlei Silva back in July of 2011.

Deemed as the “next Anderson Silva” on the last season of the Ultimate Fighter, Uriah Hall now likely needs a victory to keep his spot on the UFC’s middleweight roster following an 0-2 start to his UFC career. Hall made his UFC debut on the show’s live finale, but lost a split decision to Kelvin Gastelum in a shocking upset. He then made his sophomore appearance in the octagon at UFC Fight Night 26, but lost a lack-luster decision to John Howard.

Cub Swanson got the biggest win in his career at UFC 152 with a stunning first round knockout over Charles Oliveira, which catapulted his name into title consideration. The win was his third in a row, earning TKO finishes against George Roop and Ross Pearson as well.

Dustin Poirier returned to his usual ways at The Ultimate Fighter 16 finale with a first round submission victory over Jonathan Brookins.  Previously, he suffered his first lost inside the UFC to the “Korean Zombie” Chan Sung Jung by submission in the fourth round, in what was considered the best fight of 2012. The lost to Jung snapped a five-fight win streak. 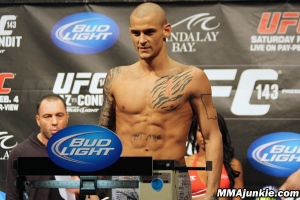 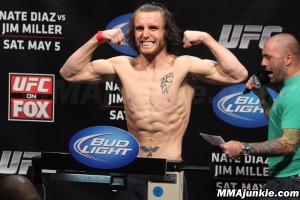 The Joint at the Hard Rock Hotel and Casino

Jonathan Brookins has had mix success since joining the UFC, going 1-2 in the octagon since winning the twelfth season of the Ultimate Fighter. Brookins defeated Michael Johnson by unanimous decision in the season’s finale, but then lost his following fight by decision to Erik Koch. Most recently, Brookins was submitted in the second round by guillotine choke to Charles Oliveira at the TUF 15 Finale.

Dustin Poirier had a five-fight win streak snapped by Chan Sung Jung via fourth round brabo choke in a “Fight of the Year” candidate. During his streak, Poirier earned notable wins against Jason Young, Pablo Garza, and Max Holloway.

Tim Elliott fell short in his UFC debut, losing a unanimous decision to John Dodson, but made the fight the fight a lot closer than expected by most. The loss snapped an eight-fight winning streak, which included wins over former UFC lightweight champion, Jens Pulver and Josh Rave.

Jared Papazian drops to the flyweight division after an 0-2 stint as a bantamweight. He lost his UFC debut to Mike Easton by majority decision at UFC on FX 1. Most recently, Papazian was submitted by Dustin Pague in the first round last June.