Former Bellator bantamweight champion, Zach Makovsky impressed in his UFC debut, dominating from start to finish en route to a unanimous decision victory over Scott Jorgensen at UFC on FOX 9. He’s now won three straight fights since his release from Bellator in December of 2012.

Joshua Sampo extended his win streak to five, following a second round submission win over Ryan Benoit at the Ultimate Fighter 18 Finale. Other notable wins during the streak include a decision over UFC-veteran Antonio Banuelos and a submission victory over Bellator-veteran Alexis Vila.

Erik Koch will move up a weight class after a 2-2 record in the UFC’s featherweight division. He began his UFC tenure with two-straight victories over Rafael Assuncao and Jonathan Brookins, which earned him a title shot against Jose Aldo, but an injury kept him from competing in that scheduled match-up. Since his return, he’s lost back-to-back bouts, most recently a decision loss to Dustin Poirier at UFC 164.

Rafaello Oliveira likely needs a win to keep his job with the UFC, following a pedestrian 2-5 record with the promotion. Most recently, at UFC 162, Oliveira was stopped by vicious leg kicks in the second round from Edson Barboza. His last victory came in July of 2012, earning a unanimous decision over Yoislandy Izquerdo. 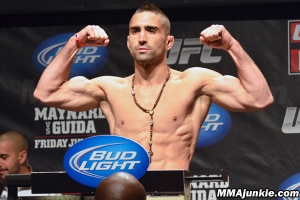 Erik Koch was slated to face UFC featherweight champion, Jose Aldo earlier this month, but an injury suffered during training forced him out of the fight. He earned a title shot on the heels of a four-fight win streak which includes victories over Francisco Rivera, Raphael Assuncao, and TUF winner Jonathan Brookins.

Ricardo Lamas catapulted himself in to title consideration with an upset victory over Hatsu Hioki at UFC on FX 4. The win was his third consecutive victory in octagon, which also includes wins against Matt Grice and Cub Swanson.

Erik Perez has gotten his UFC career off to a fast start, earning first round stoppage victories in his first two fights in the UFC against John Albert and Ken Stone. He hasn’t lost a fight in two years and currently holds a seven-fight win streak.

Byron Bloodworth was unsuccessful in his UFC debut, losing in the second round to Mike Easton via TKO at UFC Live on Versus 6. The loss to Easton snapped a three-fight win streak, with his last victory being a second round knockout of Scott Farhat in August of last year.

Jose Aldo looks to defend his UFC title belt for the fourth time since the UFC/WEC merger. Aldo made his UFC debut in April of last year, when he defeated Mark Hominick by unanimous decision. He has since earned a unanimous decision victory against Kenny Florian and a knockout win against Chad Mendes to retain the title.

Former UFC lightweight champion, Frank Edgar gets a shot at the title in his first UFC fight at 145 pounds. He has lost back-to-back controversial decisions to Ben Henderson, which has persuaded him to drop to featherweight. Edgar won the UFC 155 pound title in April of 2010 against BJ Penn, then defended it three times in a rematch with BJ Penn and twice against Gray Maynard.